The Garraf Park and Olèrdola Park

is known as the Catalan Coastal Mountain System, which extends over the counties of El Baix Llobregat, L´Alt Penedès and El Garraf. Its boundaries are the lower valley of the River Llobregat, the Mediterranean Sea and the Penedès depression. Together they cover 12,984 hectares (El Garraf covers 12,376 ha and Olèrdola 608 ha).

The two parks are made up predominantly of a rocky and rugged landscape, characterised by calcareous rock with a large number of cavities, dolines and sinkholes. El Garraf nevertheless has a small reddish sandstone strip at the eastern end of the park while the plain surrounding Olèrdola is covered with vineyards. The highest peaks in El Garraf are La Morella (594 m) and El Rascler (572 m). El Puig de l´Àliga (465 m) is the highest point on the central, rocky platform that characterises Olèrdola. These two areas are legally protected by special protection plans sponsored by Barcelona Provincial Council. They were definitively approved by the Government of Catalonia in 1986 (El Garraf) and in 1992 (Olèrdola). Both parks were extended to join each other and at the same time were also connected to the Park of El Foix.

Barcelona Provincial Council jointly manages these two protected areas with the eleven municipal areas they cover and has the participation of different sectors involved. Since January 2002, El Garraf Natural Park has been twinned with the Parco Naturalle della Maremma in Tuscany, Italy.

The landscape in El Garraf and at Olèrdola has an arid appearance, low relief and rounded summits. The valleys are deep and the slopes are scarped with greyish-white rocky walls. Nearly all parts of both massifs are made up of calcareous rock, which, in contact with water and the air, has formed karsts, i.e., caves, chasms, dolines and sinkholes. The Eramprunyà area is very different and characterised by reddish sandstone conglomerates that give rise to a rather abrupt landscape. The coastal location means a typically Mediterranean climate with infrequent but torrential rains and mild temperatures in spring and autumn, temperate winters and hot, dry summers. The landscape of both the Olèrdola Park and El Garraf Park is distinctively Mediterranean and has borne witness to a long relationship between man and the environment.

The emphatic dryness of the summer and low water retention capacity of calcareous soils determine the vegetation growth. It is characterised by dense shrub land, of around three metres in height, predominated by the Kermes oak and the mastic tree and where the Mediterranean fan palm, Mauritanian grass and other species of African origin grow.
Further inland, the landscape is patched with holm oak and Aleppo pine woods, most of which have been affected by forest fires and which are now in the process of regeneration.
In the valley bottoms or closed valleys vegetation typical of evergreen oak woodland grows: evergreen oaks, boxwood, madder, honeysuckle and viburnum.

The harsh environmental conditions (strong insolation, lack of water, sparse vegetation and extremely abrupt relief) have very much determined the species that have established themselves here and given rise to the interesting and unusual fauna that lives here. Animal species include the Montpellier snake, the horseshoe whip snake, the black wheatear, the black-eared wheatear, the blue rock thrush, the beech marten and the Eurasian badger. The Mediterranean turtle has also recently been introduced.
Ponds are key points in the lives of many species, especially those in which water is essential for their life cycles such as amphibians and invertebrates.
The highly developed system of karsts has encouraged the presence of cave-dwelling animals, some of which are the only species of their kind in the world.

Despite the appearance of solitude and depopulation currently given by the El Garraf and Olèrdola massifs, they have been subject to intense and varied use by man throughout the ages.
In El Garraf, the harsh conditions of the physical environment have ruled out the building of great monuments. The remains of the castles of Eramprunyà and Olivella give an idea of the period of the frontier wars against the Saracens. Similarly, though dating from later times, are the towers in the coastal sector, which were set on their own or built onto some of the farmhouses. These bear witness to the ever-present danger that came from the sea. A good example of Romanesque architecture is the small church of Olivella.
Nevertheless, the most representative forms of architecture of El Garraf are the farmhouses and buildings linked to agricultural activity, often associated withwine production (the houses of Can Marcer, Mas Quadrell and Can Grau), and the farmhouses connected to goat herding (Mas Maiol, El Carxol and Vallgrassa). These farmhouses are often grouped into nuclei of three or four units, like those of Campdàsens and Els Masets and in the case of Jafra (now abandoned) even reaches the size of a hamlet. Other characteristic features of the buildings are the large number of drystone walls, livestock enclosures and the stone huts.
This building heritage includes four especially noteworthy items. These are the Güell cellar and La Pleta, works by the Art Nouveau architect Berenguer; the hospital of Olesa de Bonesvalls, one of the best preserved examples of medieval hospital architecture, and the remarkable site of the palace of Plana Novella, right in El Garraf.
It was not until the 18th century that the population began to increase significantly. This was accompanied by a great expansion in vine and wheat growing. The plague of phylloxera that began in the second half of the 19th century put a definitive check on the extensive agricultural activity in El Garraf. This activity, however, still continues in Olèrdola, where large vineyards and dry farm crops occupy some of the valleys´ flat land. El Garraf area has been home to a large number of activities (stone quarrying, firing ranges, etc.) the great impact of which has been furthered by forest fires.

The monument site of Olèrdola

The Olèrdola mountain is a natural boundary between the plain of the Penedès and the coast and between the north and south of Catalonia. The surrounding cliffs also make it an ideal place for protection in times of instability. It is not surprising that the enclave was used as a fortress from prehistoric times to the Middle Ages but was abandoned for long periods of time when occupation of the plain presented no danger.
The central nucleus of Olèrdola and its surroundings have been populated since the Bronze Age. In the small peripheral valleys, cave paintings and ceramics made of flint have been found. Some of the most interesting vestiges of the first settlers in these lands are found in the valley of Olèrdola, now known as the bottom of the Seguera. Rock shelters and caves carved into the cliffs that shelter the valley were used to provide crude dwellings.
At the start of the Iron Age, the Olèrdola platform became a stable habitat with an urban organisation. The first known fortress to be constructed was built between the 8th and 7th centuries BC. Since that time, there have been periods of occupation and abandonment.
From the 4th to 2nd centuries BC, the Iberian people known as the Cossetans settled here and made use of the pre-existing wall. At the end of the 2nd century BC, the Romans made Olèrdola a military outpost. They erected a great wall and watchtower at the highest point to watch over the territory and the Via Heraclea (later to become the Via Augusta). Today, great differences can be seen between the lower part of the wall, with a height of 3 metres and built in the Roman period, and the medieval top section. The large cistern or central well is also from the Roman period. Once the Iberians had been pacified, the Roman garrison was no longer necessary and the site was abandoned.
A thousand years later, in medieval times, Olèrdola once again became important in controlling and repopulating the territories of southern Catalonia, from the 9th century onwards. The first document in which the name of Olèrdola appears dates back to the year 950. A name that stands out from that period is that of Mir Geribert, prince of Olèrdola, who came into confrontation with the count of Barcelona, Ramon Berenguer I (1040-1059).
In this period, Olèrdola marked the limit of Christian territory. There are few remains of dwellings from the period but there are various holes made in the rock and silos or underground deposits for storing grain.
With regard to stone buildings, the Roman wall was rebuilt and the church and castle were constructed. The first pre-Romanesque style church was consecrated in 935 and dedicated to the warrior Archangel Saint Michael and to Saint Peter. The new Romanesque church was built in 992 beside the previous one. The castle, built onto the Roman watchtower, is a spacious single-nave building, characteristic of these types of 10th- and 11th-century buildings. It was destroyed in 1108 in the invasion of the Almoravides.
On the flat area of the Albats (meaning "newborn"), near St Michael´s church and outside the walled compound, several human-shaped tombs can be seen carved into the rock. The name of the place reflects the high incidence of infant mortality in the high-medieval period, although there are also the tombs of adults and children.
From the 12th century onwards, the advance of the frontier southwards and the pacification of the territory gave rise to the decline of Olèrdola. The gradual movement of people to lowland areas ended in total abandonment in the 13th and 14th centuries, although it was sporadically occupied in times of instability.

El Garraf Natural Park and Olèrdola County Park offer visitors a whole network of facilities and services for public use, set up to meet the needs of those who wish to enjoy and become thoroughly acquainted with this interesting natural and cultural heritage.
The network provides a wide range of information centres, facilities and programmes linked to archaeology, pedagogy, history, art, astronomy and gastronomy. These are also complemented by a series of exhibitions, audio-visuals, workshops, courses, conferences and environmental study stays, which are grouped together in the "Viu el Parc" (Experience the Park) programme and in the annual schedule arranged by each facility.
This wide range of leisure activities also includes a series of sign-posted walks (short and long-distance) and guided itineraries at weekends, as well as specially adapted itineraries for the disabled. Furthermore, both parks have pedagogical facilities and programmes geared to schools and organisations ("Coneguem els nostres parcs"- Let's Get to Know Our Parks) as well as people who want to collaborate in voluntary initiatives (through the Friends of the Natural Parks Association).
This information may be found in greater detail and recently updated at Park Agenda which may be consulted on the Internet.

Complete itineraries information may be found at itineraries on foot which may be consulted on the Internet. 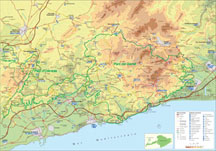