The Natural Area contains some of the massif of Les Guilleries (in the Pre-coastal Range), the southern part of the Collsacabra range (Transversal Range) and the mountains of Savassona, which connect the previous two formations. The area´s highest point is the 1,187-metre hill of Faig Verd at Vilanova de Sau. The natural viewpoints of Els Munts, El Far at Tavèrnoles, and Sant Llorenç del Munt at Sant Julià de Vilatorta are not as high but all have an altitude of over 800 m.

This territory is the result of natural evolution and development by people for continual use and exploitation. Its natural assets, economic resources and building heritage make it particularly interesting.

The Les Guilleries-Savassona Natural Area Consortium, which is made up of the councils of Folgueroles, Sant Julià de Vilatorta, Sant Sadurní d´Osormort, Tavèr noles and Vilanova de Sau and Barcelona Provincial Council, manages the natural area in accordance with sustainability criteria in order to preserve its areas of great agricultural and forestry interest and ensure they do not deteriorate.

The Special Plan, approved in 2003, set out control and management criteria that would guarantee the protection and conservation of heritage and natural systems. It also established the regulation, encouragement and improvement of agricultural and forestry developments and consolidation of and improvement in activity performed within its scope.

The location of the Natural Area of Les Guilleries-Savassona is exceptional as it is a place of contact between the Mediterranean region and the Euro-Siberian or central European region. There are three different landscape types: Les Guilleries, Savassona and El Collsacabra. The mountain formations are mainly covered in forest and have different combinations of holm oak, oak and pine forests. On the gentler slopes, the forest alternates with meadows and crops. The landscape is characterised by the cliffs of bare rock and the Sau reservoir and its area of influence.

There are two totally different forest areas: the dense, moist oakdominated forests of Les Guilleries, and the drier forests of Savassona, where the undergrowth is less abundant and holm oak and Scots pine predominate. Ash and beech grow in shaded areas and specific particularly moist spots. Furthermore, the valley bottoms, through which permanent streams and watercourses run, are covered by gallery or riverside forests that include alder, elm and willow.

Forestry is an important economic resource in the area and has brought with it considerable replacement of forest species. This has led to a remarkable mosaic of forest types, ranging from chestnut to groves of different conifer types.

The contact between the Mediterranean region at its lowest parts and the highest points of the Euro-Siberian region makes the natural area´s fauna particularly characteristic.

In this territory it is not uncommon to come across wild boar, squir rels, badgers, foxes or genets or to hear nightingales sing in the right season. Simi larly, the Sau reservoir

zone is habitat to birds associated with inland wa tercourses. These include the cormorant, the grey heron and the mallard. Noteworthy is the nesting of the Egyptian vulture in the area of the Roc del Migdia scarps. Pyrenean brook salamanders and salamanders and the white-clawed crayfish reproduce in running water while several species of frog and toad can be found in the ponds.

Within the natural area, the primary sector now coexists with a certain industrial and service sector development in the municipal areas. Although agriculture, forestry and livestock rearing continue, the primary sector has been gradually abandoned because of the difficulties associated with the physical features of the territory, a lack of skilled labour and the problems involved in taking on new techniques and obtaining more competitive products.

The architectural heritage includes vestiges from other periods that have survived to date. Many historic items are located at high points and provide panoramic views. The oldest signs of human settlement are to be found in the engraved stones and prehistoric sites associated with great blocks of sandstone on the plain of Sant Feliuet de Savassona and in the remains of the Iberian settlement of El Casol de Puigcastellet. The constructions of Malafogassa, Sant Llorenç del Munt, Sant Feliuet de Savas sona, Sant Andreu de Bancells, Sant Romà de Sau and Santa Maria de Vallclara are good examples of Romanesque and pre-Romanesque architecture. The Baroque-Neoclassical periods are represented by the shrine of Puig-l´agulla.

The area also has a large number of farmhouses of medieval origin.

A fortification that shows ancient human settlement in the area.

The hydrological wealth of the Natural Area of Les Guilleries-Savassona is manifest in a large number of springs, many of which are in leisure and walking areas. Interesting examples include the Trobada spring, the Foquers spring and the spring of En Martí.

A visit to the Les Guilleries-Savassona NaturalArea provides an opportunity to enjoy a mountain and coastal environment, downy oak forests with box, Scots pinewoods, beeches, the vegetation of riverside and wet environments with species such as alder, willow, poplar, hazel and maple, plantations of chestnut and fir, the vegetation of rocky environments, fields of crops, open scrubland and the Sau reservoir and its environment.

Interesting geological features include the cliffs of Vilanova and Tavertet, the Romegats col and the southern slope of Les Valls.

All information may be found in greater detail and updated at Park Agenda which may be consulted on the Internet.

Complete itineraries information may be found at itineraries on foot which may be consulted on the Internet. 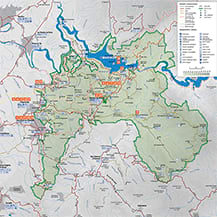